International Screenings in the Deaf Community Continue for "White Space"

White Space will have its Italian Premiere at CINEDEAF Rome International Film Festival on December 1, 2013. CINEDEAF aims to enhance and showcase films of deaf national and international directors, and films of hearing directors having deafness, deaf culture and sign language as main theme.

In addition to starting the New Year with the release of the Anthology, White Space will have it's Hong Kong Premiere at the Hong Kong International Deaf Festival in February, 2014.  Production is proud of the way the short film has been embraced by the international community both deaf and hearing.  It is our mission to bring individuals and audiences together in the spirit of poetry and art!

The movement that is White Space Poetry Project has been moving so quickly, it's hard to keep up!  The Spring and Summer brought residencies, workshops, festivals and private screenings throughout the US and even a trip to Toronto Canada.
﻿﻿﻿﻿

This Spring the Young Authors Conference hosted Creative Director Maya Washington who presented Small Packages: Short Films and Plays.  Students screened White Space and worked on drafting their own original concepts for short films and plays.  The work continues to inspire youth to learn more about poetry, film, and ASL.

Additionally, White Space screened at private events  throughout the summer including Jacamo Magazine's I am Freedom Open Mic along side a special performance from Kendrick Dial of Lyrical Groove and performance art from Creative Director Maya Washington.  The film also screened privately at the Cave Canem Fellows Retreat in Pittsburgh, PA in June.

The White Space short film made it's Canadian debut at the Toronto International Film Festival to rave reviews as well as Chicago's Indie Boots Festival and Seattle's Langston Hughes African America Film Festival in May.  White Space was recently featured in reviews by the Dreher Report as well as Insight News. 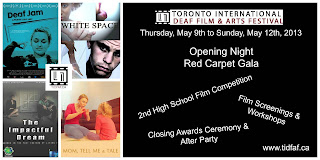 The festival journey continues this fall with a German Premiere at Gebärdensprachfilmwoche 2013 in Berlin, Germany September 25th-28th, 2013 during deaf week.  2013 marks an exciting international push for the short film and additional global screenings in the near future. 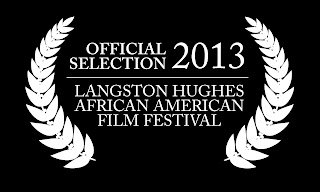 Ryan Lane has been busy since he took on the role of  The Poet in White Space.  Shortly after shooting the award-winning short film, Ryan was cast as the angst ridden heart-throb Travis on ABC Family's Switched at Birth.  What started as a few guest spots has turned into a steady gig for the talented actor.  He's become a fan favorite and will appear in the much anticipated "All ASL" episode of the popular ABC Family show.

In an ALL NEW episode of ABC Family's award-winning original series Switched at Birth, told entirely in American Sign Language (ASL), the students at Carlton School for the Deaf protest to keep their school open, based on real life events of the "Deaf President Now" protest held 25 years ago on the campus of Gallaudet University. The ground-breaking episode, a first for a scripted series on mainstream television, will air Monday, March 4 at 8/7c. The special episode, will be told from the perspective of the series' multiple deaf characters -- with open captions for hearing viewers.
The ambitious episode marks an important milestone in mainstream television and the exposure of ASL as a vibrant aspect of deaf culture in the United States. Through the 2013 Deaf Outreach Campaign, White Space Poetry Project will continue to illuminate mainstream images of ASL and deaf culture in television, film and literature.
Audiences can tune into ABC Family's Switched at Birth, Monday, March 4th at 8/7c. 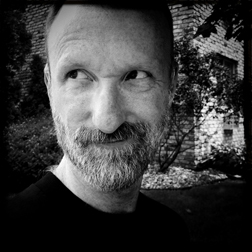 RAYMOND LUCZAK (pronounced as written but with a silent "c") is perhaps best known for his books, films, and plays.

Raymond was raised in Ironwood, a small mining town in Michigan’s Upper Peninsula. Number seven in a family of nine children, he lost much of his hearing due to double pneumonia at the age of seven months.

His forthcoming collection, How to Kill Poetry, will be released through Sibling Rivalry Press March 12, 2013.  In a recent review by Polar Magazine, writer Walter Beck praises the collection, "This book is simply astounding, there is nothing like it out there today... Even if you're not a big poetry reader, pick this one up, it's so surreal in its execution that it will leave you thirsting for more."

With the ghosts of Emily Dickinson, Arthur Rimbaud, Sappho, and Walt Whitman leading the way, How to Kill Poetry showcases a highly selective overview of Western civilization poetic development from its oral traditions to the silence of pixels.  The narrative then jumps 200 years into the future where the unfortunate consequences of global warming creat a dramatic backrop against which poetry (if it is to have any redeeming value) must survive. 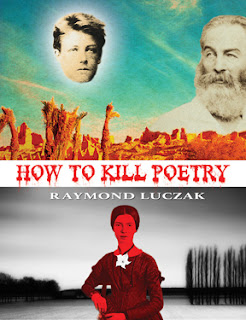 Luczak has literally traversed the white space between the hearing and deaf worlds through performance, film and literary work on the page throughout his prolific career which is highlighted on his website, www.raymondluczak.com .

In short order, his play Snooty won first place in the New York Deaf Theater’s 1990 Samuel Edwards Deaf Playwrights Competition, and his essay "Notes of a Deaf Gay Writer" won acceptance as a cover story for Christopher Street magazine. Soon after Alyson Publications asked him to edit Eyes of Desire: A Deaf Gay & Lesbian Reader, which, after its appearance in June 1993, eventually won two Lambda Literary Award nominations (Best Lesbian and Gay Anthology, and Best Small Press Book). In January 1996, Deaf Life Press brought out his first book of poems, St. Michael's Fall. In July 2002, the Tactile Mind Press brought out two of his new books: Silence is a Four-Letter Word: On Art & Deafness and This Way to the Acorns: Poems. His play, Snooty: A Comedy, was published as a book by the Tactile Mind Press in February 2004. His first novel Men with Their Hands won a first-prize award from the Arch and Bruce Brown Foundation for Full-Length Fiction 2003 in the spring of 2004. The book has gone on to win first place in the Project: QueerLit 2006 Contest; Rebel Satori Press published it as part of their Queer Mojo imprint in November 2009.

A Midsummer Night's Press brought out his third collection of poems Mute in February 2010. Hot Off The published a very limited edition (10 copies only!) of his 12th title Notes of a Deaf Gay Writer: 20 Years Later; it is now available as an ebook for the iPad and the Kindle. Sibling Rivalry Press brought out his fourth poetry collection Road Work Ahead in March 2011.

His work has appeared in various anthologies and periodicals, and will be included in the forthcoming White Space Poetry Anthology.